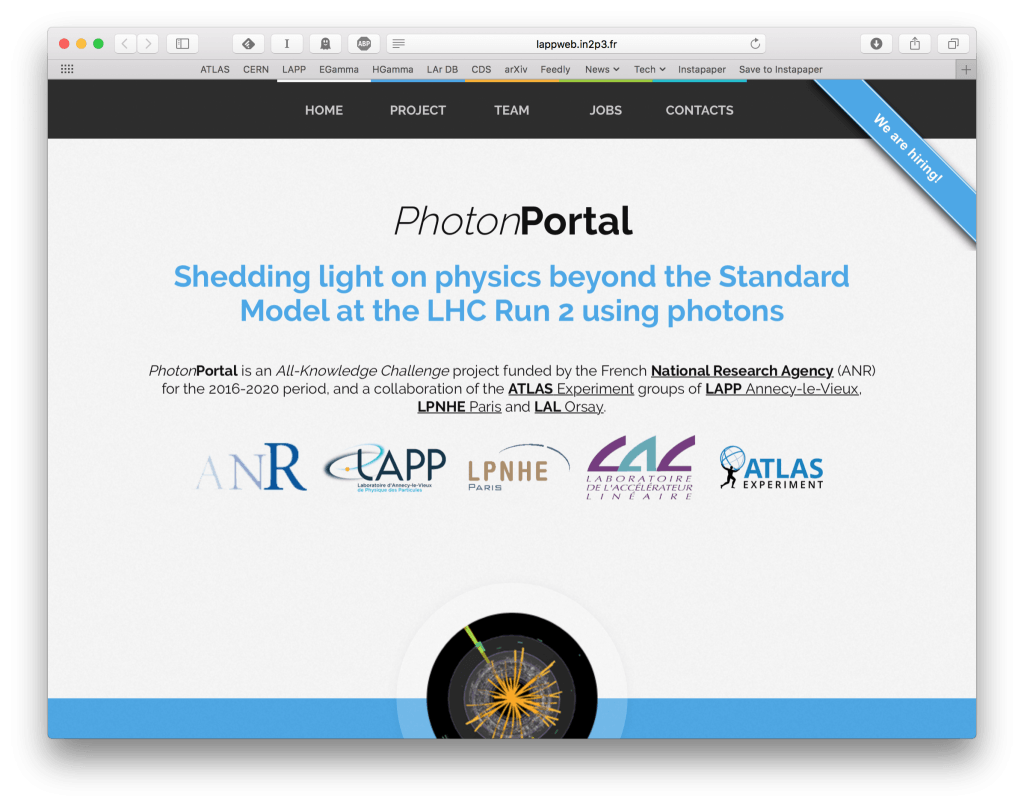 I rarely discuss job administrative details on these pages, but I thought it could be interesting to advertise a couple of job openings here. At the beginning of 2016 me and a group of collaborators from the ATLAS experiment were awarded fundings by the French National Research Agency (ANR) for a project called PhotonPortal. The goal of the project, which I am the Principal Investigator of, is to search for phenomena beyond the Standard Model using event topologies with photon in the final state, and with precision measurement of the Higgs boson properties with the

The PhotonPortal fundings will be mostly used to hire three 2-years post-docs, to be respectively based in LAL Orsay, LPNHE Paris, and at my lab in LAPP Annecy. We are now opening the first position to work in LAL, so if you have a PhD in particle physics and are interested to join the team, consider to apply. The opening has a formal deadline at December 1st, but the position will stay opened until filled. The opening for the position based in Paris will happen during Fall 2017, while that to work with my team in LAPP in Fall 2018. I'll publicise the future openings when the time will come.

At LAPP we are also looking for a new PhD student, to work with me on the measurement of the Higgs boson differential cross section with the

decay. The student is invited to join the team during Spring 2017 for an undergraduate internship  that could last from a minimum of six week to four months. This  pre-graduate-school internship is strongly advised: it will help to see whether the student is a good match for the team, and the other way around. Upon mutual satisfaction, the student could start the PhD in October 2017, based at LAPP with frequent presence at CERN (or the other way around, if needed). The reference university that will award the PhD title is the University of Grenoble. If interested, do not hesitate to contact me, all my work contact are on the project description.

A note for the Italian students: the undergraduate internship is something one can do between the end of your Master (laurea specialistica) and the beginning of the PhD, or as a part of the Master itself, upon agreement with your University. This is actually what the French student usually do, as part of the compulsory internship requested to complete their second-level Master and graduate.

P.S. The PhotonPortal website is my first attempt to work with a static site generator. I used Jekyll, and I actually while liked it. One day or another I'll discuss the details a bit more.