ICHEP is over. After the last plenary session the few remaining braves stormed out of the auditorium, strained with conference fatigue, and headed back home. I must confess, I found a week-long conference, with six full days packed with presentations, pretty long and tiring. I'm not completely surprised that in the last days not many questions came from the (depleted) audience.

Since this is probably my last entry in this blog, I'll entertain you with a random collection of final impressions, and maybe a tentative balance on the blogging experience itself.

Lot has already been said and written, so let's simply put it this way: the conference was excellent. Superb location (Paris is always Paris), excellent venue (I was just astonished the Palais de Congres doesn't provide wireless microphones in the smaller rooms, everything else was perfect), very efficient organization (thanks!), and an optimal balance of contents. Ok, the catering was less-then-perfect, but why should we indulge in complaining about the little details? 🙂

The LHC has entered the game

Again, not a big news, but it's good to repeat it: we begin to see the first physics results from the LHC experiments! And even if this is not yet exciting new physics, those times are approaching fast: after more than 20 years of preparation, it's a nice sensation for the whole community.

On the low side, I must say that I found the theory contributions in the first part of the conference a bit isolated. This is probably normal in the context of parallel sessions (and there were anyway good phenomenological contributions in the sessions more oriented to experiment), but as an experimentalist I probably missed the opportunity to learn something really new for me. For instance, I learned from Georg that:

the talks in the lattice session had actually been selected to be accessible and of interest also to people outside the lattice community (in particular there were a number of review talks), so it was a bit of a pity that the talks were attended almost exclusively by lattice theorists.

I agree: pity! Maybe this should have been advertised more? The situation was of course different in second part of the conference, and I really appreciated some of the more theory-oriented talks in the plenary sessions.

The quality of the talks was in general rather good, and of course touched its best in the plenary sessions. I had anyway the impression that the non-LHC and non-Tevatron speakers gave the best talks in the parallel sessions. I have a theory, at least for the LHC talks. Nowadays we (the LHC experimental physicists) routinely use slides as a support for documentation of the daily work we are doing. Most of us have taken the (bad!) habit of packing them of all the information we want to record, information that should anyway go into a written report, sacrificing the graphical quality - and the effectiveness when used as a visual support for an oral presentation - in favor to an hybrid object that the experts in the field call slidument. Sure, it's possibly something easier to present: one can pretend to use the text on the slide as a reminder of what to say, maybe even avoiding to reharse. Well, the quality of this kind of presentation will definitively be worse, it's guaranteed, and - if they maybe can fit a weekly collaboration meeting - will certainly not meet the standard needed for a conference . Have a look at the slides of some of the presentations in plenary session of Wednesday, for instance the ones on dark matter or cosmology: 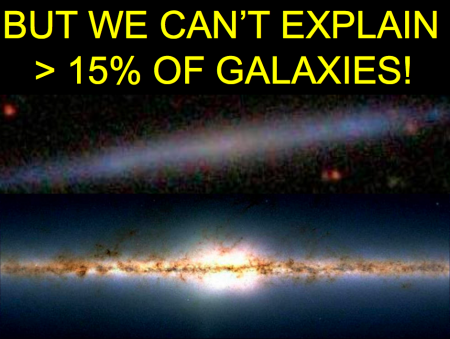 Almost no text, just the few word need to stress the concept, clear figure, no clutter. Sure, the speaker must now what to say on this slide! Now compare for instance with this one (taken from an ATLAS talk, so that nobody can say I'll try to blame our competitors only): 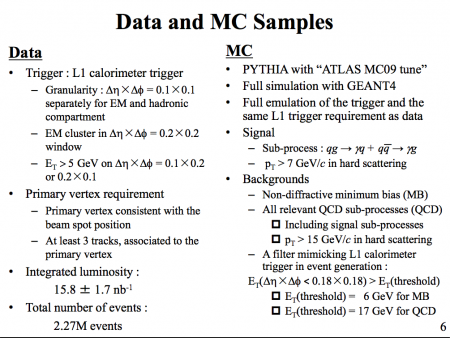 No excuse, we have still a lot to learn!

I am still digesting the experience, and in this sense I'd really appreciate to get some feedback by the readers on this. On my side, I can say it has been interesting to blog a conference - it was a primer for me - and to do it in a collective blog, with different voices and styles.

Some of the feedback I go tell me that the blog has been appreciated outside, especially by the colleagues that were not attending the conference: apparently it helped to feel connected, more than the webcasts and slides only can do. It might also have helped the journalists reporting the conference to the media: a blog like this can certainly act a filter, and help the non-physicist to grasp what's important, what gets us excited, and why.

This (semi)official blog of the conference was an experiment, and in this respect the organizers wanted to keep a low profile, and verify on the field what the reactions would have been. It seems to me that, if in effect the community seems interested by the format, maybe next time something slightly more ambitious could be tried. For instance, with a bit more of organization we could have had some video interviews at the conference (someone did that, and did it very well indeed), a dedicated Twitter stream, and especially more visibility at the conference itself. I had in fact the impression that - at least at the beginning of the conference - a large part of the participants had no idea that this project was existing at all. And, since the most interesting and useful part of the blogging experience is the conversation with the readers, this could have been even more fun.

Anyway, I would probably do it again, should the occasion came. See you in two years in Melbourne?