If you have lived in France (but not in Paris) at least for a little while, you have certainly learned the hard way that there's no France outside Paris. Or, like the inhabitants of the City of Light prefer to put it, Paris est la France, et la France est Paris.

While there are certainly good reasons to identify the French grandeur with the capital city, there is certainly more in France that just Paris. And I'm not only thinking about the food variety, that we experienced yesterday evening at the conference dinner where the excellent food specialties of five different French regions were served. Actually, that we should have experienced, and that were supposed to be served: in reality the food flow was definitively not enough to satisfy the appetite of the disappointed conference participants. But this is another story.

This valuable variety (of fine food, nice places, and of other excellent things) is rarely recognized by the Paris people - that's a fact - but it is was rather unfortunate to discover that this point of view seems to be shared by the French President himself. As you might have heard, Nicolas Sarkozy attended the ICHEP conference yesterday to give an "opening" talk (well, the conference was opened since four days, but still). Now, I really don't want to indulge in commenting the speech, nor I dare to discuss the subtleties of the French research politics. But I cannot refrain at least to note (at a very superficial level indeed) that both in the announcement of the President participation, and especially in the President speech, the French excellence in high energy physics seemed to be contained in circle of a 30 km radius centered on the Tour Eiffel.

I can tell you, this has definitively not pleased those ATLAS colleagues of mine working for instance in Annecy or Marseille, and I guess the other French physicist working for instance in Grenoble, or Clermont-Ferrand, or Strassbourg must not be that happy too. Oh, yes, the press office of the Elisee has finally changed the initial announcement, a now they are cited along with the other Paris university and research centers as "universités de province", but I'm still not sure they are at ease with the classification. And, despite the last-minute change on the web site, the President speech itself was still confined to the "region parisienne"! Are the Paris people really so distracted? I would tend to doubt it, but again, this would lead me to speculate about the current French research politics, and I'm certainly not qualified for this. Pity, anyway. 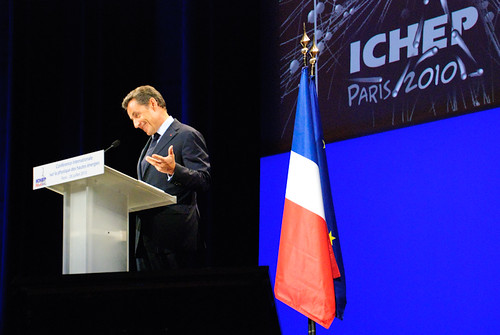