Saturday sessions were not really well attended. if we exclude the one on CP violation, CKM and Rare Decays that succeed in packing a lot of people in one of the smaller rooms. Maybe the average ICHEP participant decided to make the grasse matinee, or simply to be a tourist in the City of Light in a very nice and sunny day. Still, in the semi-empty rooms there were lots of interesting things to be learned.

For instance, I was eager to attend the session on Perturbative QCD, Jets and Diffractive Physics: partly because some of the results I have been working on in the last months were presented there, partly because I wanted to know how CMS was doing on the same subject, but mainly because I wanted to know how the LHC experiments are doing on the jet measurements. Jets are in fact copiously produced in the 7 TeV LHC collisions, and even with the not huge amount of data we have collected up to not, ATLAS and CMS are in fact already capable to make nice measurements, and, in a sense, already unique ones. 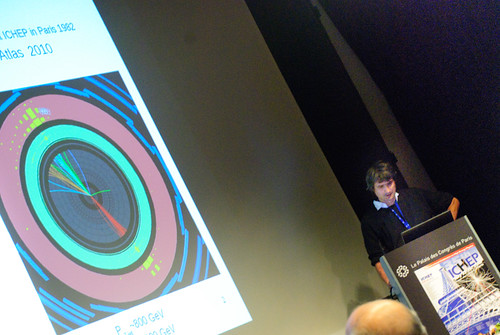 I was not disappointed: Tancredi, that was presenting the jet measurements for ATLAS, opened his talk with a nice historical reminders: there was a time, nearly 30 years ago, when jets were seen for the first time at an hadronic collider (and presented in Paris!). Those were days when a physicist could get excited for a a di-jet event with a 140 GeV invariant mass, produced in hadronic collisions at a center of mass energy of 540 GeV. Today the hype is about di-jet events of 2 TeV invariant mass: it seems to me that such a comparison helps to put things into a humbling perspective, reminding us how much road has been done, how mush is still to do, and that we are all standing on the shoulders of giants. 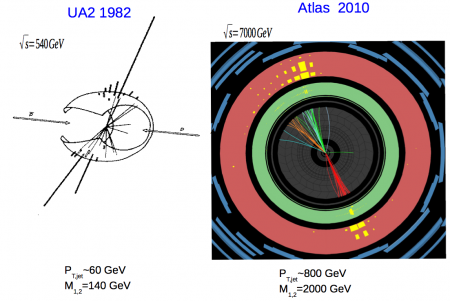 Both ATLAS and CSM had impressive first cross section measurements for single jets and di-jet objects, already binned in different rapidity regions, and up to unprecedented di-jet masses. And the agreement with the NLO QCD theory calculation is already impressive, despite the data uncertainties are not yet the best possible! 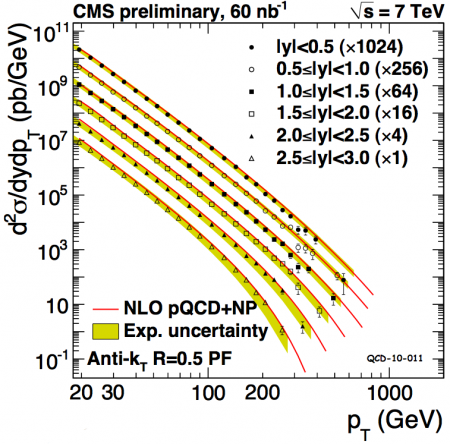 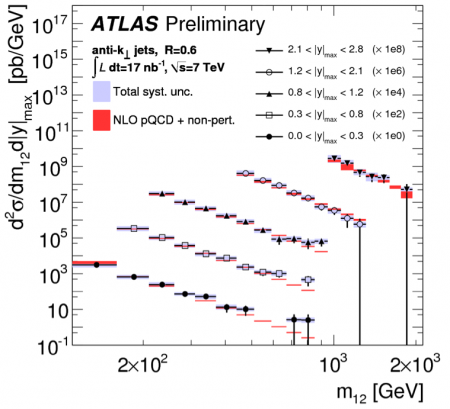 In this particular respect, I was not completely satisfied of the way the CMS explained their approach to get the 5-10% jet energy scale they claim. They certainly have several ratio measurements that reduce the impact of the systematic uncertainty on this quantity, but I'm anyway still curious! And since the data uncertainty is still the dominant one for the cross section measurement of both experiments, and it's mainly driven by jet energy scale, it's a point that will become very relevant as soon at the statistics will be large enough to make precise measurements in previously unexplored

ranges. This moment is certainly not far in time!

Of course pQCD is a nasty beast, and as soon as one starts to compare his jet results with some tune of his preferred MonteCarlo, he can be assured that someone will ask how much the chosen tunes are reliable, how well they fits with the low energy data from previous experiments, how well he know the MC authors... 🙂 I suspect a human component in this aggressive questioning: like it or not, jets are really the only domain in which the LHC experiments have already overtaken the Tevatron analyzes in mass reach. Thing that both the speakers did not fail to remind to the audience, and that might have not pleased everyone!