Friday afternoon I sat again in a relatively packed room for the Higgs session. The effect of the rumor seems to fade away, but there is still quite a buzz around the Tevatron Higgs searches, especially because our friends are professionally distilling their results at a tantalizing pace, and - in case you missed that - the final Tevatron combination will be shown only on Monday 🙂

Every Higgs search channel at Tevatron in has its peculiarities and its reasons of interest (since I'm working on the $H\to\gamma\gamma$ search at LHC myself, I was for instance particularly interested by this presentation), but what that I always find impressive in these session are not the single analyzes, but the combination of them.

What is rather clear in fact is that neither CDF nor D0 have enough sensitivity and data to see the Higgs (or claim it does not exist) in a single decay channel. Take for instance the $\gamma\gamma$ channel I was mentioning before: with this channel only both the Tevatron experiments can today only place a limit on the Standard Model Higgs boson production around 20 times the SM cross section.

On the other hand, this channel can add about 5% sensitivity to the combined SM Higgs combinations, and plays an especially important role in the mass region around 130 GeV. Similarly, dozens of other channels can bring their small but important contribution to the global sensitivity. Have a look for instance at the list of Higgs searches that are combined by D0: 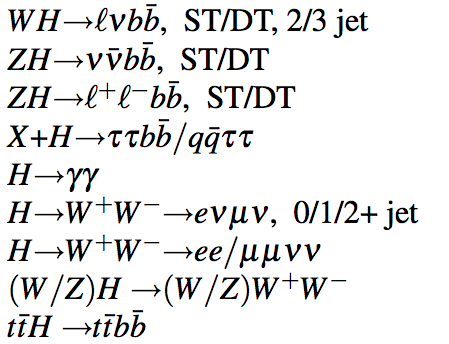 or at the impressive combination of the CDF limits for all the channels they are looking at: 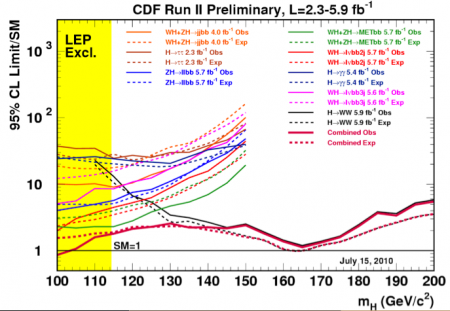 Putting all these searches together is an industrial work, with a non negligible effort of standardization of the results format, both by the different analysis teams in a collaboration and by the two collaborations. It's something ATLAS and CMS have to learn to do quickly: as it came out during the session, there already exists a combined ATLAS-CMS effort for the statistical combination of their results, and very recently a first exercise of LHC Higgs results combination was performed, but the road to reach the current Tevatron expertise and organization is still rather long.

But - don't you know? - the Tevatron combination will only be presented on Monday, so let's still stick to the separated D0 and CDF ones. As you can see for the previous plot, CDF was lucky and was able to reach sensitivity to the SM at 165 GeV alone. D0 was slightly less lucky, but is nearly there too: congratulations!

The most interesting questions to the Tevatron experiments during the session were all rotating around the same subject: how much more data wold they need to bring their curves below 1 along all the mass range? It's certainly a very relevant question: as you can see form the the ATLAS and CMS talks at the same session, the LHC experiments will need time since we can reach similar sensitivities, and in the meanwhile the Tevatron would certainly like to keep on taking data as long as possible. This is such a hot subject these days that it has percolated to the media, as the D0 speaker reminded us: 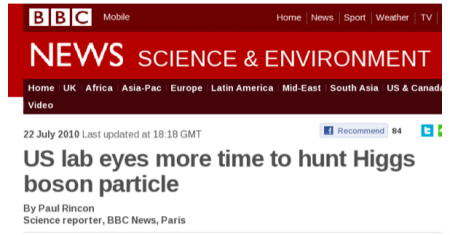 It's certainly no easy to answer: how much would the CDF and D0 sensitivity curves would move toward 1 with twice the luminosity they have today? And with three times? Taking into account that to improve the sensitivity by a factor $N$ one needs $N^2$ the luminosity, they certainly still need quite a lot of additional data. And even if they claim they can improve the analyzes further more, and maybe include some other remote channel they might still miss in the combination, statistics will still play the dominant role. But if I were them, I would certainly try to keep on running anyway as long as I can.