I mostly kept my program.

Mostly, because I arrived slightly late at the Palais des Congres for the afternoon session (the French waitress at the creperie just in front of the Saint Paul church was so slow...): Salle 252B was already so packed I was not able to enter, and I decided to head directly to Salle Maillot for the LHC-calorimetry-electron-and-photon session. Pity, I missed Erik Verlinde's talk. Someone told me during the reception that apparently his presentation was followed by quite a discussion: is there any theorist out there that attended the session and wants to report?

In a nutshell: both the ATLAS and CMS electromagnetic calorimeters are doing rather well, thanks for asking 🙂 More seriously: both the experiments seem to have successfully used a fair amount of integrated luminosity at 7 TeV to commission their electron and photon triggers, reconstruction algorithms and selection procedures. And, even if probably neither of them would ever put it in this way, both the experiments still sees some small discrepancy between data and MonteCarlo in some of the variable used for the particle identification. I would dare to say that the main difference between the two is in the way the ATLAS and CMS speakers decided to address this point. The discriminating variable used to select electrons and photons don't exactly look the same in data and MC? When asked, the ATLAS speaker simply acknowledged the mismatches, and minimized saying that there's still some "work in progress" needed to understand and solve the issues. With similar material, the CMS speaker simply flashed through the plots claiming fair-to-reasonable-to-excellent agreement for all of them. By looking in more details the graphs at the end of the session (and peering to some of the posters related to the same subject), I must admit that - despite the impression someone could have had at the end of the session - I have some hard time to conclude that one experiment is doing better that the other. I'm tempted to say that the only real difference - but I'm of course exaggerating and kidding - is their public relation strategy 🙂 In the next days we'll see more physics-oriented results related to electrons and photons: I'm curious to see if things will get more explicitly different. 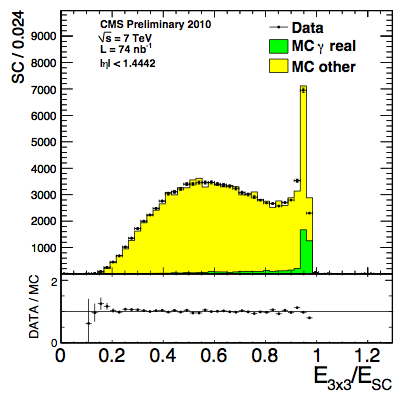 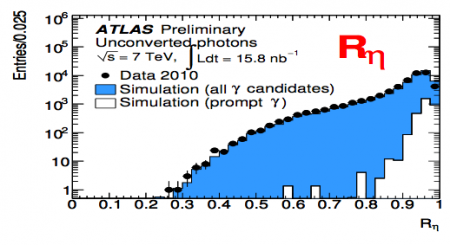 is finally taking advantage of the bremsstrahlung recovery fit that was missing at pLHC, and a fair comparison with CMS can now be done.

After the coffee break and the talk on Material mapping in ATLAS, I tried to enter again Salle 252B for the first Higgs at Tevatron session. Not an easy task: probably thanks to the rumor spread in last weeks, everyone was eager to see if there was really something to get excited about. Just to give you an idea, I finally managed to enter, but I had to sit on the floor for most of the session... 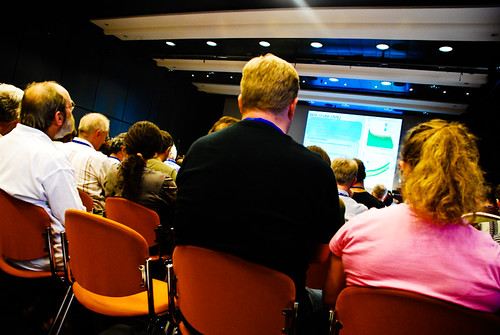 Not all of the searches at low Higgs mass were presented today, and the speakers were so kind to remind us at every single talk - in a perfectly orchestrated PR action - that the CDF combination and D0 combination will only be presented tomorrow, while for the full Tevatron combination we will have to wait until Monday at the plenary talk. I leave to you to browse the plots on the transparency, and eventually to try to do a combination by eye. I would probably bet on and larger exclusion region at high mass (easy). Someone braver - with a bit of imagination and a leap of faith - may imagine some kind of excess at low mass (but this is fiction, and I'm not good at it).

Three lines on the reception

Imagine 1088 hungry physicist packed in a small hall at the end of a long first day. Results: the waiters could not even go from the kitchen to the central bouvette with their finger-food trays, they got systematically intercepted along the way, and the trays emptied by a storm of locusts!