One month and a half ago I was playing the fortune-teller, and trying to guess what ATLAS and CMS will be showing at ICHEP as a function of the integrated luminosity they would have collected. ICHEP will start in a few days: today in principle we should be able to revisit that list, and to make more-than-educated guesses on the LHC results we will see in Paris.

Let's start with the luminosity. How much of it have been delivered by the LHC and secured by the experiments? The answer to the first part of the question is on the LHC Programme Coordination web pages, from which I took this plot: 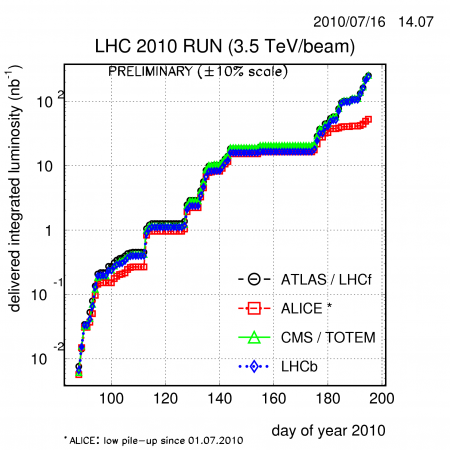 As of today, the machine gave us more than 250 nb-1: not bad at all. But if the the LHC delivers luminosity, the experiments have to record it, and the data taking is not necessarily 100% efficient: the detectors might not be ready when the "stable beam" flag is declared, or some of their parts can malfunction during the run, maybe even forcing to stop and restart the data recording. 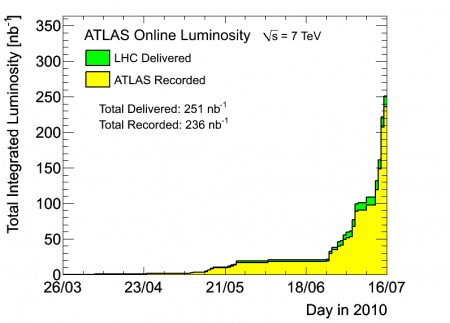 In this respect, the experiment did rather well: as you can appreciate from the plot above, the ATLAS data taking was globally around 94% efficient since the end of March. Again, not bad at all! I was not able to find a similar public plot for CMS, so I will naively assume a similar efficiency (anybody from CMS out there, that can point me to a public results?), or even a better one. We are then left with slightly less than 250 nb-1: According to the list, we could then safely bet on a W and Z evidence (and possibly on a bold first cross section measurement, at least for the W), on measurements of prompt electrons, photons and maybe muons, and on a lot of jet-related items.

But luminosity is not the whole story. In order to be shown at conferences, data have to be properly understood (and this take time), and results have to be approved (and this can take even more time, as Gordon recently reminded us). For instance, a good part of the ATLAS result-approval procedure for ICHEP took place during the last ATLAS week in Copenaghen, nearly three weeks ago! Look again at the luminosity plot, and see where we stood then: the LHC decided to increase the number of protons per bunch and the number of bunches immediately after!

Ok, none of us would be so lazy not to (at least try to) update the results with 10 times or more the data. But more data means more precise results, and funnily enough more precise results means more things to be understood. The point is those discrepancies that were hiding under the statistical fluctuations a month ago are now clearly rising their head to say "Hello! Try to guess what I am and what I mean...". As usual, things are often more complicated that they seem at the beginning.

These days both ATLAS and CMS are hectically reviewing the last-minute results exploiting the largest data samples possible, and I know there will still be approval meetings on both sides next Tuesday and Wednesday (ICHEP begins next Thursday!). I am really looking forward to see what we will get!